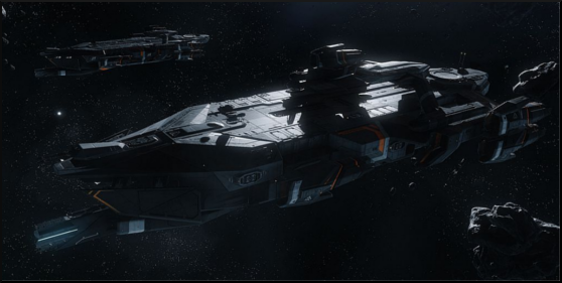 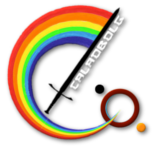 Till a rainbow graces the skies of Mars I shall be a protector.
I shall swing an arc and in its path shall spring a rainbow.
Yet mine shall have the power to slice the tops off hills
and the power to slaughter entire armies.
Caladbolg​
Click to expand...

The MCRN Caladbolg is a Raptor-class fast-attack cruiser of the Martian Congressional Republic Navy. During the events described in Caliban's War, Raptor-class cruisers are described as top-of-the-line Martian military hardware, and more than a match for any United Nations Navy destroyer (the next smallest class of ship after cruisers).

Up until the incident with the Canterbury she was part of a coalition patrol featuring ships from both Earth and Mars that minded common shipping routes.

The Raptor-class is armed with two rail guns, one dorsal near the rear and one ventral at the front. Like other ships within her class, the Caladbolg does have PDCs. These are positioned all along the ship's hull for defense against torpedoes and close range attackers. The Caladbolg has four torpedo launchers which are fixed missile silos capable of firing torpedoes with plasma or nuclear warheads. Each of these launchers has four tubes. Each silo is capable of holding up to fifty torpedoes.

She is capable of carrying two full companies of Martian Marine Corps but commonly operates as a support vessel so tends to carry lots of medical supplies and replacement parts. She is only carrying a platoon sized element of marines currently. The Caladbolg's hanger is capable of holding two corvettes in a tight squeeze. She holds a number of smaller support and assault craft.

The ship has eight main decks:

Caladcholg ("hard blade"), is the sword of Fergus mac Róich from the Ulster Cycle of Irish mythology. Spelled Caladcholg, it is also associated with the more obscure Ulster hero Fergus mac Léti, suggesting a conflation of two legends. It was said to be a two-handed sword that made a circle like an arc of rainbow when swung, and to have the power to slice the tops off hills and slaughter an entire army.

During the events of the Táin Bó Cúailnge, Ailill mac Máta takes Caladbolg away from Fergus mac Róich when he discovers Fergus' affair with his wife Medb. He gives it back when the Ulaid rally against his armies. Fergus wreaks havoc against Ulster's forces with his blade, but Conall Cernach convinces him not to kill Conchobar mac Nessa. Fergus strikes the "Three Great Strokes" on three small hills instead, blasting off their tops.
Click to expand...

The Caladbolg was constructed two years ago in orbit around Mars.

The Caladbolg, like the Strident was part of a small group of escorts dispatched to meet with the Donnager once it had been determined that vessels were pursuing the flagship. That group was ordered to return to Jupiter following the last signals from the Donnager.

Prior to the Eros Incident, the Caladbolg was tasked with protecting shipments of materials bound from the Jupiter planetary system from pirates and smugglers. During the incident the Caladbolg was on patrol. It arrived late but her commanding officer, Ailbe Bynes took charge of the small fleet. After a number of botches by other ship captains and the loss of a squad of marines within Eros he made an executive decision to cooperate with UNN forces to make a concentrated nuclear strike on Eros.

Through the bravery, fortitude, judgement, and quick thinking of UNN and MCRN forces/personnel such as Dolores Muwangwa of the UNN Thomas Cochrane, Irkalla Kasai of the MCRN Nergal, and the command staff of the MCRN Strident the threat was forestalled. A lone marine of the fated squad was recovered and now serves on-board the Caladbolg, Hector Royce.

The Caladbolg didn't take part in the battle of Ganymede though she was deployed after the fact to escort the "Daedalus" Support Cruiser along with a number of smaller Martian corvette-class frigates as they salvaged ship wreckage and recovered bodies.