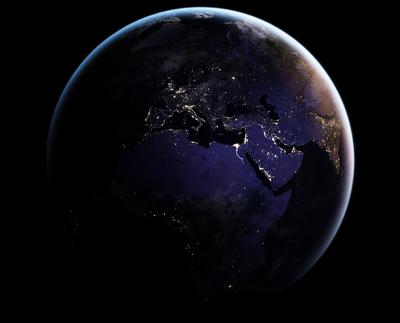 From the Expanse Wiki said:

By the mid and late 21st century, humanity's national governments, under the auspices of the United Nations, then simply a supranational organization, but with considerably more power than at its inception, had begun to establish colonies on the other planets in the Sol system, the most notable of these being Luna and Mars. However, after continuous success and because of the precarious state of Earth's ecosystem due to extensive pollution, nations decided to relinquish their national governing rights and make the UN into a global, unified government.

Eventually, in the 22nd century, the colonial government that administered humanity's first colony demanded that they be independent. The United Nations, reticent to cede their control over Mars, refused. It was only thanks to Solomon Epstein and his groundbreaking invention, the Epstein drive, that war was avoided. The colonial government offered the UN access to the revolutionary drive in exchange for independence. To avoid Mars having a tactical advantage, the UN agreed.
Click to expand...

While the UN projected itself in space, Earth stayed at a precarious balance. While environmental damage stopped, it wasn't repaired. It didn't recover either. For the next two centuries and only changed recently, Earth's infrastructure wasn't revamped or improved significantly. Rather, it stayed in its climate-crisis configuration. Sea levels stopped but didn't lower, and the oceans were still undrinkable, tinted a dark green color that felt sludgy. Biomass on land never reached a full symbiosis with the humans that interacted with it every day.

UN Logistics struggled to maintain decent conditions for half of Earth's now ballooned 30 billion people as well. Over time, massive parts of the sprawling urban centers became dilapidated by the UN's conditions, which was still okay, but definitely incomparable to rich neighborhoods, emphasizing the income inequality despite Earth's welfare state.

With the election of Leon Niael to Secretary-General of the United Nations, Earth finally had the spotlight it needed for two centuries. Programs, organizations, and orders to revamp Earth's infrastructure and improve its biosphere were put into place by the Niael government, and over the course of his first tenure, Earthers enjoyed seeing the grass glow greener and the oceans feeling less sludgy, even if it was a little bit. Major parts of the urban centers returned to life and some arcologies left over from the Urban Arcology movement finally went online, with research focused on improving arcology technology. There are still many things about Earth that need improving, however, and it will take a long time for Earth to fully recover from humanity's impact and possibly achieve symbiosis with humans.

Quality of Life
Terra and Luna are controlled by the United Nations. As a whole, it operates under the Security Council, a collection of representatives from the dozens of nations that had once made up the rest of the earth. They work together under the direct authority of the UN Secretariat acting as the chief executive branch.

Earth is ostensibly one of the nicest places to live in the system. Many on the surface enjoy a rich lifestyle and there are those on Mars and in the belt that think of the people as Terra as weak and soft due to this.

Despite this fact, however, the truth of the matter is far different. Though there are those on Earth who live like Kings, the planet itself suffers from incredibly high unemployment and those who do not have work often live in squalor. Conditions for some of the thirty billion residents of Earth can be as terrifying as those of the Belt.

Though there are many advantages to living and being born on Earth, the humans who come from Terra do suffer from some debilitations. First and foremost the people of Earth aren’t built for space like those from the Belt, they often don’t do as well in Zero-G or lesser gravity. They often feel ill and need time to acclimate. Along with this Earthers generally, suffer from a lesser immune system in space and their stomachs are less well suited for the food rations often eaten on long journeys.

New York
The capital of Earth and the United Nations. It hosts the UN government and military and the global stock exchange, as well as being the primary hub for Earth's trade to other planets.

Memorial of Fallen Heroes
This memorial located 12 Kilometers outside of New York is dedicated to the fallen heroes of the United Nations.

The Hague
The secondary hub of Earth and its fallback capital. The Hague hosts the judicial branch of the United Nations. It is also surrounded by sea walls, a consequence of the risen sea levels.

The Urban Centers
These are Earth's cities, only larger. Most of Earth's population congregate in these cities.

Warsaw
This is the heart of Earth's naval industry and the seat of the UNN. Most spacecraft parts are assembled here and many shipwrights hail from here.

Pecunia Spin-Station
An exorbitant luxury space resort where the dominantly wealthy distinguish themselves and do their business.

Arcologies
Most are impressive, dilapidated wrecks occupying a good bit of many urban centers, being leftovers from the Urban Arcology movement. These are characterized as gray blotches from orbit. Under Niael, however, some have come online and are taking in population.