No one has ever described du Plessis has a handsome man. His nose is too long for his face, the stubble on his chin is uneven and there is a general lack of symmetry to his features. He is tall and slender like most belters, wide across the shoulders but with a slim chest. His dark hair is often shaved up the right hand side but falls long down across his left.

He is rarely seen without a terminal strapped to one wrist, or an eyepiece over his right eye.


Du Plessis is neither a quiet nor a demure man. He has a particular way with words and speaks in an animated manner with broad gestures. Some people find this amusing when he's telling stories from the past, but some find it quite tiresome. He's not afraid to speak the truth or offer an opinion.

Du Plessis was born on Eros. He never knew his father and his mother, a low level clerical worker at the docks, never spoke much about the man. From a young age he liked to work with technology. His schooling was not of the highest standard but he would often be found around the scrap merchants of the shipyards putting components back together. 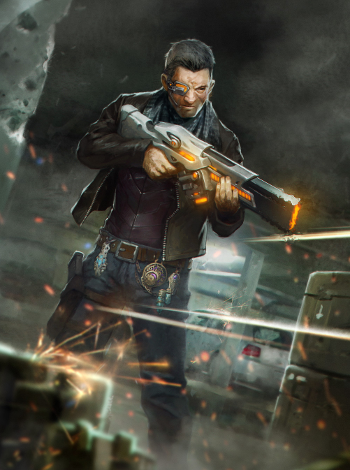 It was through his contacts there that he picked up a job on a salvage freighter. With lucrative contracts to salvage from the veritable cloud of degrading satellites around Earth, Morné had plenty of work assessing and testing components. He was regarded as one of the more skilled members of the crew and received more pay than those who sorted through the scrap metal. There was more than a little tension between them but eventually he was promoted to a position of relative authority within the company.

Navigator on an OPA ship

Working in operations on Tycho

This page has been seen 704 times.