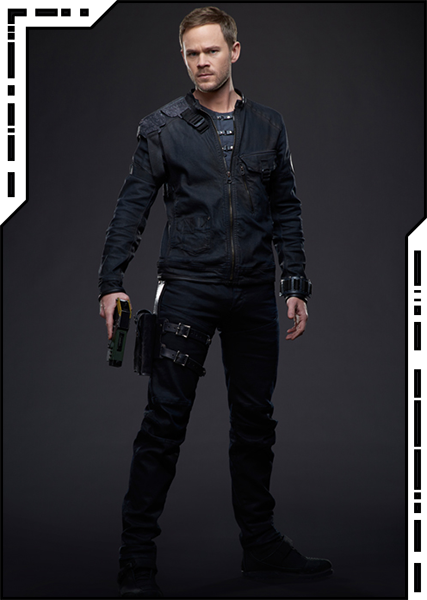 Luke grew up around all kinds of ships and vehicles, thanks to his family's transport company on Earth. He was flying tug-class ships in his early teens, and showed an impressive aptitude for piloting from a young age. For over a decade Luke continued to improve, and halfheartedly claimed he could fly anything with an engine mount - which isn't too far from the truth, really.
​
Tech-Savvy

Because of being so heavily involved in the Jakoby transport business, part of the education was learning ship systems, repairs and modifications. And with a lot of hours behind ship hull panels, Luke has become quite skilled at most areas mechanical. Enough so that he is able to maintain his own ship, The Spitfire, with little-to-no assistance. He is also becoming very good at improving on existing systems, and has jury-rigged his ship to run with a single crew member if required.​

Switched On, Tuned In

Luke is a smart guy. He's got brains, know-how and a habit of working out problems. He's also very good at getting a feel for people, and because of his past, he has developed an open-mind when it comes to dealing with anyone from different regions of space. Since Luke spent a lot of his time on Earth, and traveling to Mars and the Belt, he's kind of found an odd middle-ground where it's hard to relate to any single affiliation; and with that lack of definition can come a lot of stigma, from all sides. So, out of necessity, he's developed as much of a likeable personality as possible.
​
Driver Not A Fighter

Luke is a pilot, first and foremost. While he can handle himself fairly well in a scuffle, and is a decent shot with a pistol, the fact remains his strengths are not physical or martial. Give the man an engine and a means to steer it, and he'll get you there with time to spare; but put him in a serious life-or-death fight, without the advantage of his ship, and he'll just as likely freeze and avoid as much conflict as possible.​

Luke has never really belonged. From a young age, he spent a lot of his time moving from Earth, to the Belt, to Mars, and then back again. His childhood consisted of spaceship interiors, or his parent's transport warehouse on Earth. As a result, Luke has developed a very open-minded approach with others who affiliate with a specific peoples, despite still receiving stigma for being an Earther, which annoys him. He also gets annoyed when Earthers treat him differently, because of so long spent abroad in the Belt or Mars.

Due to his past, and the losses he's suffered, Luke has become a distant person. He tries to keep others at arms length, not wanting to get too personal or involved, solely to avoid loss again. This has resulted in a lonely adulthood, and has made him more selfish than he would like to be; and as a result, his morals have shifted, with personal gain and wealth largely being the deciding factor in life. He's all for helping anyone who has the right currency.

Luke's biggest love is his ship, The Spitfire, and he has dedicated a lot of time and effort into making it the best it can possibly be. In fact, Luke's strongest connection in the universe is to an inanimate object that he pilots - which should say enough about his wanting to keep his distance.

That's not to say he doesn't have friends, or at least acquaintances, but as of yet Luke hasn't met anyone that he'd willingly put himself in front of a bullet for. To compensate for his lack of emotive expression, Luke tends to be a joker, often in an attempt to persuade people to like him and to deflect if things get too personal. As such, he's jovial, talkative, and isn't afraid to approach others, despite not actually wanting much of a connection from those same people.

This page has been seen 506 times.