Blunt but not always truthful. Levi learned from a young age to keep her head down and mind her own business. Her instinct is to be distrustful of others and to rely only on herself. This is not due to any innate hatred of others, but simply bred out of survival skills taught to her by her father and learned over the years. Levi, though no longer able to be considered a 'young adult' is still struggling to find her way and her place in the mess of things in space. The Belt is all she's ever known and she does hold a certain amount of pride in being a Belter.

Levi had grown in what some might say to be a "privileged" home on the Belt. Her family could not have been considered poor and lived, for the most part, rather comfortably. This is not to say that the Jones family has not made its less than fair share of sacrifices to be where they are. Loss is no stranger to them, nor is grief or painful regret. Levi understands these things on an intimate level and struggles with wanting to blame her environment for these things rather than unjust circumstances.

She both loves her home and cannot wait to leave it. She dreams of green fields and blue skies but lives with a sense of utter hopelessness of ever seeing those dreams realized. For now she does what she needs to in order to make the best of the situation she and her ailing mother find themselves in.

Though Adra Jones was born on the belt, her parents were not. The Jones originally hailed from Earth: her father serving with the government and her mother a private tutor. They were a wealthy couple that had never imagined a string of strange events would send them to the Belt where Mr. Jones was tasked to relocate in order to fulfill an undercover mission to try and gather information on OPA. Jones was not even their real last name but Adra is not aware of this. 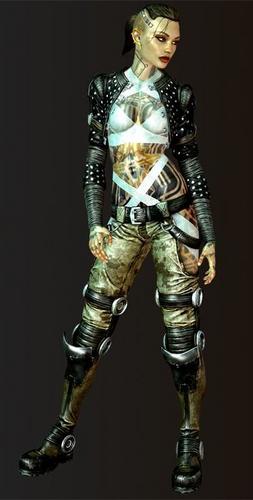 She was conceived shortly after they made their new home on the Belt and born as an Earth child among a people that were not her own. Many often wondered at her physical strength and lack of medical ailments - the Jones simply passed it off as good luck, good health, and good early intervention for a family that had the access and the funds.

For the most part her childhood was uneventful aside from the hallmarks of young Belters growing up within a city and society constantly in flux. Adra attended school during the day and developed a mechanical fix as a hobby in her spare time. As she grew older, as young adults are want to do, her need to develop independence from her parents sparked a rebellious streak. Tattoos, parties, drugs, piercings, implants, scumbag boyfriends. Adra ran the gamut, waging war against the oppressors that be at home. She made lots of terrible friends, forgoing the advice and begging and pleading from her father to stay away from the OPA. Adra at some point became entangled with them, enamored by the idea that their fanaticism provided purpose and need for her there. Her young adult years became something of a blur and she was nearly expelled from school - everything came to a head when she received a call from her father that her mother had fallen desperately ill and it wasn't something that money could magically fix.

Adra's world flipped in a moment of clarity.

She dropped OPA and returned home, agreeing to clean up, get her head back in the books, and to help take care of her mother. Adra was so close to a degree in mechanical engineering when a man - a stranger - arrived at her door stating that her father was dead. There was no story, there came no answers, they never saw his body.

"He couldn't be salvaged. I'm sorry."

Adra received a key to her father's storage locker and some personal affects from his office, including a vintage Levi denim jacket he'd been known for wearing when off the clock. She took to wearing it constantly, earning her the nickname Levi - it stuck. Preferring to leave her old name and all the things that went with it behind (bad and worse choices) she took to using the name as a new identity. Levi dropped out of school in order to take up a job with a friend of her father's who offered it to her out of pity, knowing the failing health of her mother who could no longer work full time. Supporting themselves would become their greatest challenge.

They were forced to move from their comfortable blue collar home and live now in the lower level apartment blocks. Levi's mechanical talent and skills notwithstanding, her mother's medication is very expensive and they barely scrape by. Somehow Levi always manages to make ends meet, but its not always in the best of ways.

Between an asteroid and the hard space. - with @Lukas Forgrave

This page has been seen 687 times.