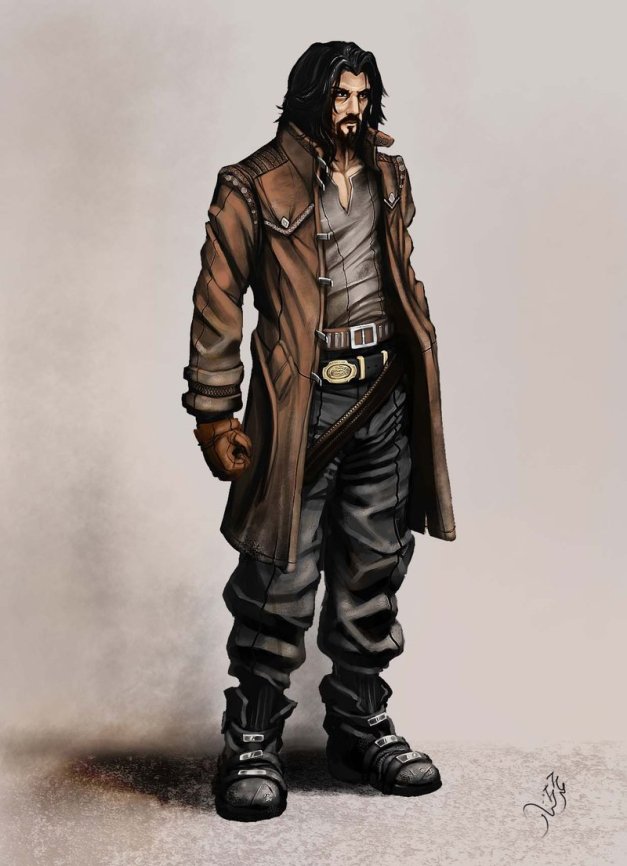 Skills
Gift of Gab:
This lady killer is a silver-tongued devil--he can make you believe anything.

Sure Shot:
Damian's paranoid father made sure he knew how to safely and effectively use a gun.

Traits
Damian has the typical Belter slenderness and stature. He keeps his hair long and beard medium-long. His skin could be tan if he lived down a well, but instead it has a pale olive hue. He has a tattoo of an inverted triangle below his left eye and a traditional belter neck tattoo.

Personality
Charismatic and Mercurial, Damian Slavko is immediately well-liked by all. Hes an idealist, but lacks an eye for detail. Impulsive, ambitious, and eager to prove himself, the scent of excitement or money sends him into a frenzy. What he lacks in planning, he makes up for in enthusiasm.

Biography
Damian Ivanovich Slavko was born on Ceres, the second son of the OPA radical Ivan Slavko. His 18-year-old brother, Sacha, died as a result gang violence when Damian was 10. This event caused his life-loving father to fall into a deep depression and put immense pressure on Damian to live up to his brothers name and his father's expectations. As he grew older, he developed a close-knit circle of friends with which he ran scams and committed petty crimes. At the center of this circle was he and his closest friend, Henry Noam. When Henry's mother died and left him his mining vessel, Damian convinced him to sell it so they could go in together and buy The Durango which they used for piracy and smuggling. He now captains the Kanyari under contract for New Providence Station.

This page has been seen 294 times.